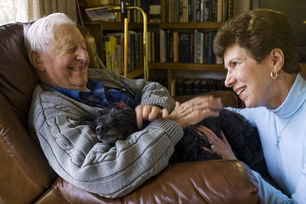 "Doc" Maberry with his wife Patricia and Zandie.
Patricia Maberry married "Doc" in 1975. During their 37 years together she worked with her husband, assisting during surgical procedures and providing animal care. At the same time she was busy with her own professional career which includes many years in human resources and retail management.

In the late 1970s the Maberrys formed a business, Wildlife Enterprises, which focused on the care of domestic and wild animals.

In 2011 she published Packy & Me, which acknowledged the impact that Packy’s story had on the worldwide community, and highlighted Portland and the Oregon Zoo. It was important to her to complete the book as a gift to her legendary husband while he was still alive. She achieved that goal – much to the delight of Dr. Maberry.

Patricia served on numerous boards and advisory councils, at both the state and county level and currently is an active member of the Royal Rosarians, serves on the Washington County Public Affairs board, and is a member of the Oregon Zoo Foundation.