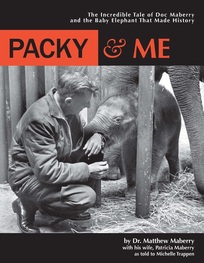 Dr. Mathew Maberry with the assistance of Patricia Maberry, his wife and the book's project manager, and author Michelle Trappen, completed Packy & Me in 2011.

The book delivers a riveting account of Packy's birth. Step by step we follow the false labors, the lack of information, and the ever-present worldwide media camped out in the barn to report the latest on Packy's mother, Belle.

Maberry captures the moment with a journalistic sense of authenticity and a deep compassion for nature and the animals in his care. Complete with newspaper clippings and photos, this scrapbook is sure to educate and captivate audiences all over again. It's a story that you, like the proverbial elephant, won't soon forget.

It was important to Patricia Maberry that the book be completed as a gift to her legendary husband while he was still alive. She achieved that goal – much to the delight of Dr. Maberry.

Despite the loss of her husband in 2012, Patricia Maberry continues to share his timeless story. The third edition of Packy & Me was recently released with enhanced photos. It has also been made available for Kindle so that the story of Dr. Maberry, his work and his history with Packy can be made even more accessible to a new generation.

Did you know that the Oregon Blue Book lists Packy the elephant as a notable Oregonian? He also has his own Wikipedia page, appears in the Oregon Encyclopedia, has had hundreds of articles written about him, is the main character in a childrens' picture book and appears on sheet music. Packy is a celebrity!

Born in Portland, Oregon on April 14, 1962, the birth of this precocious pachyderm captivated the world. Packy garnered national and international attention as the first captive elephant born in an American zoo in 44 years.

Currently, he is the oldest male Asian elephant in North America. With a shoulder height of 10 feet 6 inches and overall height of more than 12 feet when standing up straight, Packy is also one of the tallest elephants in the United States and perhaps one of the tallest worldwide.
Order Here